The final action in Round 1 of the Currie Cup comes from Newlands, Cape Town on Saturday where Western Province clash with the Blue Bulls.

Province start their bid to go one better than 2018 with this home fixture against a Bulls side who took them to extra time in a Newlands semi final last season which WP eventually edged 35-32. A week earlier Western Province had led the Bulls 34-7 at half time of a Round 8 clash at Loftus which was subsequently abandoned due to torrential rain.

Province won all 6 of their matches in the 2018 regular season to top the log 4 points clear of the Sharks. Home fixtures in the round robin delivered wins over the Cheetahs 32-0, Griquas 38-12 and the Sharks 50-28.

Western Province finished the 2018 regular season with a points difference of +163 and were favourites heading into the play offs. However following that epic semi final encounter with the Bulls they were subsequently turned over by the Sharks (17-12) at Newlands in the final. John Dobson is coach for the Currie Cup campaign.

The Blue Bulls finished fourth on the log last season with 3 wins and 3 defeats against their name before they gave Western Province a mighty scare in the semi finals. In the round robin stage Bulls road trips saw them start with a 34-12 win over the Cheetahs in Bloem before a 26-10 loss to the Sharks and 40-45 win at the Griquas.

Pote Human continues as the coach and Burger Odendaal will captain the side. In a recent warm up the Bulls beat the Pumas 42-7.

Note, odds quoted are correct at the time of last update but are subject to change.

An interesting betting heat to finish the first round and slight preference is for the Bulls on the plus handicap. Although Province dominated the regular season in 2018 they ran out of steam for the play offs and I’m not overly convinced they should be outright favourites this time around.

Wins at Newlands for the Blue Bulls in recent times are hard to find but gut feel is the start they have been allocated by Sunbet (at slightly reduced odds) is enough given the line is currently 5.5 with some books.

Sunbet, Claim your 1st deposit bonus of up to R1,000 here

Coronavirus has led to the suspension of Super Rugby by SANZAAR on the completion of Round 7. Goodforthegame's trademark betting previews of every match along with The Handicap, our flagship video show streamed live on Youtube, will return as and when the tournament is ready to resume.

Click on this link for the latest advice on 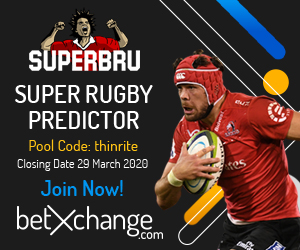