Before we look at Tuesday's games let's take in a title race betting update from Hollywoodbets . 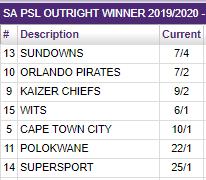 Looking at those prices the 25/1 about Supersport United catches the eye.

Sundowns have taken four points from their first two league matches and they will kicking themselves for conceding a scrappy equalizer in the closing moments of their visit to Chippa United a week ago. Leading 1-0 at the break thanks to a goal from Lebohang Maboe Downs couldn't kick on and they paid the price at the death with the game ending 1-1. Sundowns first outing delivered a 2-0 home win over Supersport with Vilakazi opening the scoring midway through the first half and Themba Zwane sealed the points in the closing stages.

At the weekend Sundowns claimed a semi final place in the MTN8 with a 3-1 home win over Bloem Celtic. After a goalless first half Celtic opened the scoring but Downs finished the stronger with all their goals coming in the last 16 minutes of the game.

Whilst Sundowns progressed in the MTN8 at the weekend City let favourite backers down in their quarter final match up with Polokwane City, going down 2-0 in

Cape Town in a competition they won last season.

In the Absa Premiership City have made a solid enough start, drawing 2-2 awat at Baroka and beating newly promoted Stellenbosch 1-0. They were 2-0 up early doors at Baroka on the opening weekend of the season but were pegged back by half time and Chris David's early goal was enough to secure maximum points in the derby with Stellies.

In last season's head to heads Sundowns won 3-2 in Tshwane and City took revenge with a 2-1 win in Cape Town.

In the current betting for this game Hollywoodbets quote Sundowns at 7/10, the draw at 24/10 and Cape Town City can be backed at 4/1.

These two sides have played out some ding dong battles in recent times although the contrasting fortunes in the cup at the weekend will see Sundowns a popular choice with punters. However if City can return to something like their best they could be a handful and I'll make a speculative call on both teams to find the net.

Only two teams have yet to secure a point in the Absa Premiership this season and Amazulu are one of them. They threw in a shocker at home to Wits first time out, crashing to a 3-0 defeat and in their second match they conceded the only goal of the game late on away to Polokwane City.

It's been a trubulent few days at Orlando Pirates with coach Milutin Sredojevic resigning on Friday for personal reasons. A day later the Bucs crashed out of the MTN8 at the first hurdle, losing 1-0 at home to Highlands Park.

Pirates return to league action on the back of mixed results in the Absa Premiership. They started the new season with a 3-1 home win over Bloem Celtic but last week they were soundly beaten 3-0 away to Supersport.

The corresponding fixture last season finished 1-1 and Pirates won the return in Orlando 4-1. The Bucs also beat Amazulu in the Telkom Knockout 3-1 (aet) in KZN

Hollywoodbets have Pirates as favourites to win the game, quoted at 7/10 at the time of writing whilst the draw is priced at 22/10 and Amazulu are 9/2 to come out on top.

Pirates have to regroup quickly after losing their coach and they were probably rattled by that news heading into their cup tie at the weekend. In view of that recent news they look very short in the betting to win this game although bear in mind Amazulu have also been struggling.

Although the Bucs have fired blanks in their last two outings, one league and one cup game, I always think they have goals in them and they give the opposition a chance too.

I'll side with over 2.5 goals in the hope that Pirates can return to something like their usual form.

Bet: Over 2.5 total goals with Hollywoodbets